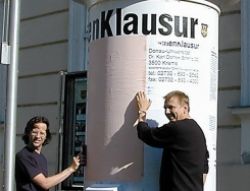 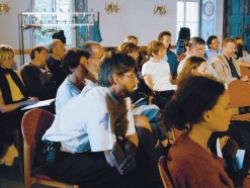 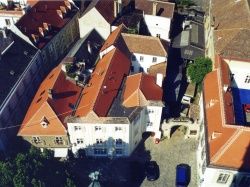 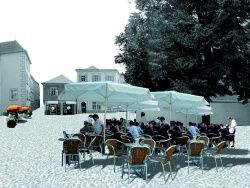 In a democratic process that involved a major investment of effort, the population of Krems (Lower Austria) joined together in formulating proposals for the redesign of the city’s central square. Through initiating two working groups it was possible to overcome many differences and to finally present the local municipality a result with consent.


After the City of Krems had a number of benches built according to a design by the artist Leo Zogmayer in the spring of 2000, wild discussions erupted in the city, and eventually a citizen’s initiative against the benches was even launched. For the next project involving the redesign of public space, the city council resolved that residents should be actively involve in the decision-making process. Thus WochenKlausur was invited to work together with the people of Krems in developing proposals for redesigning the central church square. The group’s task was neither to decide on the formal appearance of the square itself nor to supervise the realization of the proposals made by the residents. The time span set for the project was much too short for such involvement. The challenge was to put democracy into practice: how could a heterogeneous group of residents reach an agreement on a list of proposals for transforming the space?

WochenKlausur began by doing some media work and making a public presentation of the plan. Then the group used an anonymous questionnaire to obtain information regarding residents’ opinions on the central square in its existing form and their wishes for changes. For this purpose the group set up an advertising column with a mailbox on the square. The column was also used for publicly documenting the project’s progress and for announcing events.

A total of 219 people filled out the questionnaire and deposited it in the mailbox on the advertising column. Additionally, 47 interviews were conducted with residents, merchants at the open-air market, business owners, the parish priest, local politicians, representatives of various associations and anyone else with an interest in the church square. WochenKlausur also organized six talks held by eminent Austrian specialists in the fields of historic preservation, the history of the square, architecture, art and traffic planning, which were intended to stimulate discussion and aid in the decision-making process.

Finally, two working groups of ten residents each devoted themselves to the task of drawing up concrete proposals for the square’s design. WochenKlausur assembled these groups in such a way that they brought together people of varying age, gender and profession who also represented a diversity of interests regarding the square’s use. Subsequently, the results of the two working groups were compiled into a concept paper that was ratified unanimously. This paper was then officially presented to the city government and the mayor in a ceremony followed by a reception. Of course it did not represent the opinions of all Krems residents, but it did contain the opinions of a number of people who were willing to invest much time and energy in the matter and who clearly saw the redesign of the square as an important issue. To supervise the realization of the proposals, the groups elected two speakers. Some of the proposals were implemented by the city, but unfortunately not all of them.
Elisabeth Eitelberger, Pascale Jeannée, Carola Stabauer, Stephan Szigetvary, Wolfgang Zinggl